Milton Sender of Stamford, CT has made a $300,000 donation to the ONS Foundation for Clinical Research and Education to support the operations of a new arthroscopy, surgical skills and biomechanics laboratory. 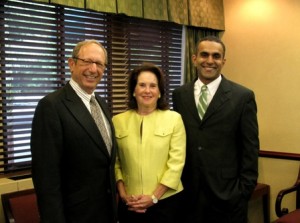 The ONS Foundation for Clinical Research and Education has announced the receipt of a $300,000 donation from Milton Sender of Stamford, CT and Middleburg, VA. The funds will go towards the operations support for the Foundation’s new laboratory for arthroscopy, surgical skills and biomechanics research.

Milton Sender is a co-founder and former-CEO of Daymon Worldwide, a marketing company of private-brand products. He became interested in the Foundation after being treated by physicians at ONS who are also involved with the ONS Foundation. “I met (Drs.) Mark Camel and Seth Miller when I needed surgery on my neck and shoulder after a fall from a horse. I was very impressed with the competence of the doctors at ONS. I heard about the Foundation and I wanted to do something to help people in my own community who have helped me so much. The Foundation was a natural choice. I believe that if you are good at what you do, you shouldn’t have a ceiling over your head. I hope my gift will help stimulate others to support the Foundation, so it may continue to advance research on treatments for bone and joint conditions into the future.” Mr. Sender added that his own experiences with injuries and treatments have made him acutely aware of the potential for orthopedics and neurosurgery to have a major impact on peoples’ lives.

The $300,000, which will be distributed over five years, will go towards operating the ONS Foundation Laboratory for arthroscopy, surgical skills and biomechanics that is under development and expected to open in January 2012. Research projects currently underway using outside labs include a comparison study of open and minimally invasive spinal fusion procedures, a comparative outcome and cost analysis for treatment of unstable odontoid fractures in the elderly, an evaluation of intra-articular rotator cuff repair and an examination of the pathenogensis of rotator cuff tears.

“It is an honor to have Milton’s support,” said Vicki Leeds Tananbaum, Vice President to the Board of Directors of the Foundation. “To be recognized by someone of Milton’s stature and reputation is a real complement to the Foundation. We look forward to working closely with him.”